The transfer of graphene from one substrate to another requires a transfer agent that usually needs to be removed by washing with an organic solvent. These solvents are harmful to the structural integrity and intrinsic property of a graphene film. There has been considerable research into finding an alternative approach to this.

Inspired by their daily life, senior student Cai Nianduo from the Department of Materials Science and Engineering at Southern University of Science and Technology (SUSTech) published a paper as a co-first author in the respected journal of colloid and interface chemistry, Journal of Colloid and Interface Science (IF=5.091). The research paper, entitled “Oil boundary approach for sublimation enabled camphor mediated graphene transfer,” proposed the use of camphor, a natural product, as an agent for transferring single layer graphene. 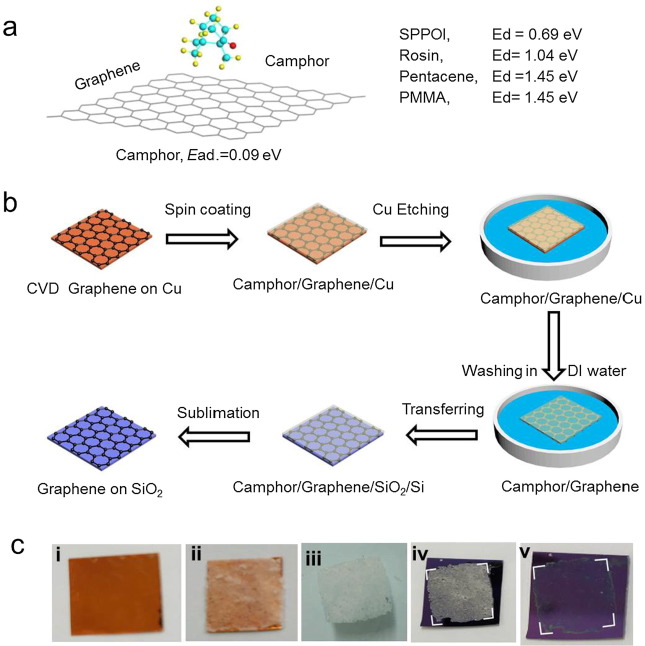 Graphene is a new type of carbon nanomaterial with a unique two-dimensional honeycomb crystalline structure. It also features excellent electrical, thermal, optical and mechanical properties. Graphene is used in electronic devices, optical devices, sensor devices, electrochemical energy storage and composite materials. There are many commercial applications for the use of graphene that are currently known, and the future for it appears vast.

Chemical vapor deposition (CVD) is an effective method for preparing high-quality graphene films on a large scale. Among them, CVD growth based on metal substrates such as copper and nickel is a commonly used preparation process. However, the graphene synthesized by this method needs to be transferred to a specific target substrate (such as SiO2/Si, quartz or plastic) for further performance research and application.

Wet etching transfer using a macromolecular polymer is one of the currently widely used methods, and polymethyl methacrylate (PMMA) is the most common. However, there tends to be a lot of PMMA residue left after transferring the graphene, reducing the quality of the graphene film. While recent studies have explored the effect of some small organic molecular compounds on the transfer of auxiliary layers, most of the small molecule auxiliary layers do not provide sufficient support to cause wrinkles and breakage of the graphene film. 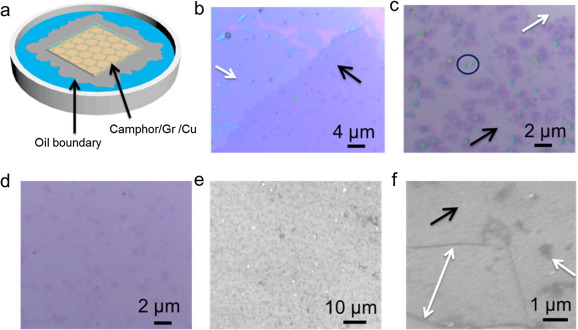 Cai Nianduo worked in the research group of Associate Professor Cheng Chun to investigate a variety of polymers and small molecular compounds to replace PMMA. The daily life use of camphor was proposed due to its solubility in common organic reagents, and the vastly reduced amount of camphor residue remaining on a graphene film. These and other benefits ensured that the auxiliary transfer layer can be completely removed through a short period of low-temperature annealing or anhydrous ethanol cleaning.

The researchers also found that when the copper substrate was etched away after a self-made camphor solution was spin-coated onto a graphene film, a layer of camphor oil was formed around the graphene film, providing fastening protection. The camphor oil layer has an outward pulling force on the aqueous solution surface, which prevented wrinkles from being formed on the surface of the graphene. The technology avoids the long-time immersion and high-temperature annealing operations of an organic reagent, so the graphene film remains more flexible and less damaged.

Cai Nianduo has received many postgraduate offers from institutions including the University of California Los Angeles (UCLA), and the Swiss Federal Institute of Technology in Lausanne (6th World Rankings for Materials Science in 2019). He has decided to accept the offer from the Federal Institute of Technology in Lausanne, Switzerland, to continue his studies after graduation. In his sophomore year, he joined the research team of Associate Professor Cheng Chun of the Department of Materials Science and Engineering. This is where he began his exploration in the field of two-dimensional materials. Under the guidance of Associate Professor Cheng Chun, the research and development of this technology began, and he completed the work with fellow co-author B.N. Chandrashekar. At present, they have submitted their relevant research results for PCT patent applications.

The research work was supported by a number of funds, including the National Natural Science Foundation of China, the Ministry of Science and Technology Key Research and Development Project, the Natural Science Foundation of Guangdong Province, the Shenzhen Science and Technology Commission and other related project funds, the research funding of SUSTech, and the science and technology of Guangdong University Students Innovation and Cultivation Special Funds (“Climbing Plan”, “Special Fund for College Students’ Innovation and Entrepreneurship Training Program”).