Wrinkles are widely observed, from the landforms of the earth crust, to human skin, and to flexible electronics. A stiff-soft bilayer wrinkles at a tiny compressive strain, which is almost inevitable in real world applications. Flexible transparent electrodes, a key element in flexible electronics, often consist of stiff-soft bilayers, which tend to wrinkle under mechanical loads. Surfaces wrinkles dramatically increase roughness and reduce optical transmittance, and may also deteriorate interfacial strength. Wrinkles have become a plague to flexible transparent electrodes and related devices. Figure 1. The effect of Poisson’s ratio on surface wrinkles for a stiff-soft bilayer. 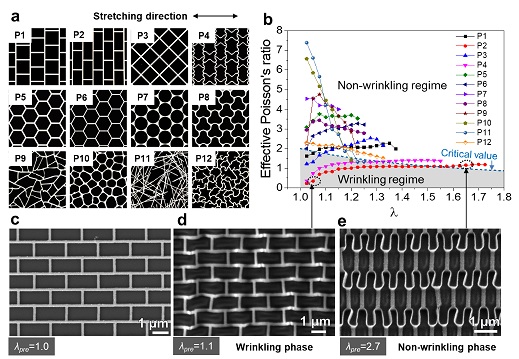 Figure 2. Effective Poisson’s ratios for a variety of network structures that can be used as flexible electrodes, as well as the wrinkling behavior of a network under different prestretches.

Recently, SUSTech researchers, Prof. Chuanfei Guo from the Department of Materials Science and Engineering and Prof. Wei Hong from the Department of Mechanics and Aerospace Engineering, as well as collaborators from the University of Houston and Harvard University, found that when the stiff layer has a large enough Poisson’s effect, a stiff-soft bilayer will be free of surface instabilities under various deformation modes including bending, compression (or releasing from a pre-stretched state), or uniaxial stretching. A critical condition for preventing surface wrinkles was derived. At small strains, the critical Poisson’s ratio for preventing surface wrinkles is approximately 2. Such a value is far beyond the theoretical limit for Poisson’s ratios of homogeneous isotropic solids, but it can be achieved by employing some network structures. This mechanism has also been confirmed experimentally—flexible transparent electrodes with network structures exhibiting a giant Poisson’s effect, as well as a stretchable tactile sensor employing the electrodes, were found to be wrinkle-free. The principle is general and can be extended to other materials and systems: a variety of network structures are found to present a giant Poisson’s effect, and are believed to be wrinkle-free platforms for stretchable transparent electrodes, flexible electronics devices, and other applications.